For the last several years, latinx representation in popular music in the United States has been very slim.

We are currently seeing an amazing renaissance of hip hop where artists like Kendrick Lamar, Migos, and Drake dominate the charts and radio. White pop artists such as Adele, Ed Sheeran, and Lady Gaga have had consistent commercial success over the years as well. In all this music, where is the voice of the latinx musician? In 2017’s year-end Billboard charts, a total of only six songs (one of which was a feature) by latinx artists placed. Of course, we had the standout success of Luis Fonsi & Daddy Yankee’s Despacito but it’s a small success given that it’s one of the only memorable latinx songs in American pop culture last year. This year, however, things are starting to take a turn.

One of 2018’s major artists is former member of girl-group Fifth Harmony’s Camila Cabello, who’s debut album Camila debuted at number one on the Billboard 200. Two of her songs, Never Be The Same and Havana, are the 15th and 16th spot on the Hot 100, respectively (on the April 21st chart). Rapper Cardi B has a whopping thirteen tracks on the chart. It is amazing to see the emergence of latinx representation on the charts. But this emergence of representation can be seen by artists who aren’t even on those charts – particularly at this year’s Coachella festival.

Two artists who are typically considered “underground” and are now experiencing a surge of success are Cuco and Kali Uchis, who both are performers at this year’s Coachella. Columbian indie pop and R&B artist Kali Uchis has worked with the likes of Tyler the Creator and recently dropped her debut album “Isolation,” which has received major acclaim, garnering an 88 out of 100 score on the popular critic site Metacritic. This year, Daniel Caesar’s song “Get You,” on which she featured, was nominated for the Grammy for “Best R&B Performance.” She has an enormous fan base online who has been following her since as early as her 2014 debut single “Know What I Want.” Cuco, also an indie musician known in particular for his “sad-boy” ballads, also has developed a huge fanbase and his name is in the mouths of the entire Los Angeles indie artist community.

Arguably, the most important latinx act at Coachella was the iconic Los Ángeles Azules, a Mexican cumbia band that’s been around since 1976. Many millennial Mexicans grew up with Los Ángeles Azules playing at family parties and in car rides with their parents. For the community, to have such an iconic and older Mexican band be one of the top-billed headliners at Coachella, is nothing short of magical. Fans on Twitter were ecstatic to see them perform: 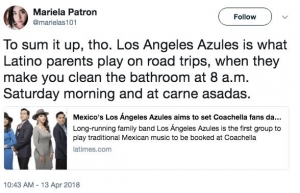 With the rise of artists like Kali Uchis and Cuco, a major headlining performance at a major festival by Los Ángeles Azules, and the return of latinx artists to the Billboard charts – the future of latinx representation in American pop culture seems not only promising but exciting.

by Gustavo De La Rosa Latino parents have high expectations for their
by Daniella Flores Moms feel guilty if they focus on anything else
by Katarina Machmer, Special to El Popo News Online from Germany Ms.
There are times that voices need to rise to articulate what is
by Hector Guardado When I see the Los Angeles County numbers for
Go to Top