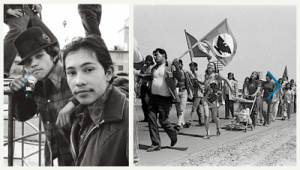 On September 16th 2017, the Autry Museum at Griffith Park opened up its new exhibit La Raza. The exhibit features photographs taken by La Raza Newspaper photographers during various events throughout the Chicano Movement.

La Raza Newspaper served as a voice during the Chicano movement with photographers acting not as journalist but as artist capturing moments during the activism.

Walking around, analyzing the photos, it was emotion because looking at these photos is like looking in a mirror and seeing what is currently happening in our country. Protests seem like they’re happening almost every week, from huge protests like the NFL Player protest to the Protests happening on schools.

This January, being apart of the Women’s Marches across the country or seeing the news coverages shows the extent of how far our current administration has done to create this type of activism against them. It’s an emotional time where we have someone as a leader who threatens not only women’s right, but rights of human beings. This exhibit not only shows the history of  Chicano roots, but it’s also showing that history can repeat itself and its our duty to continue to fight for our rights when they are threatened.

LA RAZA is part of Pacific Standard Time: LA/LA, a far-reaching and ambitious exploration of Latin American and Latino art in dialogue with Los Angeles, taking place from September 2017 through January 2018 at more than 70 cultural institutions across Southern California. Pacific Standard Time is an initiative of the Getty. The presenting sponsor is Bank of America. For more information, visit the Pacific Standard Time website.

by Stephanie Barbosa On June 22nd, 2021, I attended and stood in
by Malia Hurley The tragic death of Fresno street vendor Lorenzo Perez
by Tania Reyes It’s hard to find your identity when you feel
By Juan Zendejas Manuel was excited to start applying to companies through
by Tatiana Portillo
Go to Top